We are sure your heart is beating with excitement as you look through this guide. For those who want to know more about the road trip from Kanazawa, Gina visited Shirakawa-go, one of our recommended drive destinations, and drove up to Takayama. However, instead of Hakusan Super Rindo, she took other toll roads, Hokuriku Expressway and Tokai Hokuriku Expressway, to get there. (Hakusan Super Rindo had not opened for the season yet when we made this guide book!). Here are some impressions of the driving experience in Japan, from a Canadian perspective. 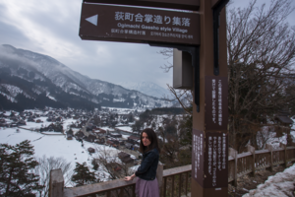 Ogimachi Shiroato Tenbodai (Observatory) in Shirakawa-go
Most car rental companies are open from 8AM-8PM. I set out first thing in the morning to take advantage of the 12 hour time limit, and got an early start to the day. Before leaving Kanazawa, I switched the GPS navigation system into English, but was surprised to find that certain functions were only available in Japanese. For travelers who can not read Japanese, the safest option would be to tell the car rental staff where you want to go and have them set up the GPS for you before departure.

Shirakawa-go: a historical haven
deep in the mountains 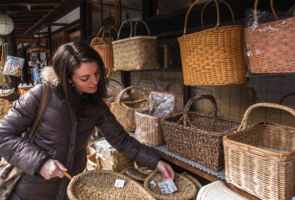 Ogimachi Street in Shirakawa-go
I got on Hokuriku Expressway at Kanazawa Higashi interchange and hopped on Tokai Hokuriku Expressway at Oyabe Tonami junction. After a couple of hours of smooth driving, I got off at Shirakawa-go interchange, and headed up to the observatory to get a glimpse of the whole town. Shirakawa-go is a charming district in the mountains, which has managed to preserve its unique culture and authenticity. After parking the car in a tourist parking lot in Ogimachi village and picking up an English map at the tourist information centre, I walked around the village and explored the farm houses. The roof of the buildings, which have been thatched out of straw, are steep and triangular, constructed in the shape of hands in prayer(gasshozukuri). This architectural style was implemented to withstand the heavy winter snow fall of the Gifu. 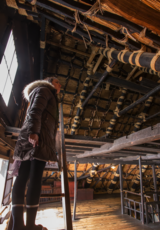 Wada HouseI was looking forward to the white winter landscape, but because of an unusual warm spell most of the snow had melted off the straw roofs into irrigation canals. Nevertheless, the town had a lovely, rustic atmosphere, where the daily life of the locals blends seamlessly with the souvenir shops and cafes which sustain it economically. I wandered around the quiet town, feeling relaxed and refreshed by the clean mountain air. At around noon, my stomach began to rumble so I headed back to my car and set off for lunch in Takayama.

Takayama: a foodie's paradise,
on the beaten track.
The quickest route from Shirakawa-go to Takayama is the Tokai Hokuriku Expressway toll road, which cuts through the mountains via a series of long dark tunnels. However, if you have the time, taking the country roads will offer a much more scenic driving experience. Takayama is a compact, bustling city, a cultural hub of the mountainous region. After parking the car in a pay parking lot downtown, I headed down the popular “Sanmachi Street” in search of a hot meal. 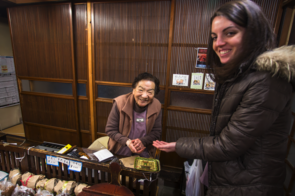 Sanmachi Street in Takayama
One of the local specialties of the region is “Hida beef” and another is “Hoba miso”. I ate a delicious lunch of thinly sliced beef grilled in miso (fermented soybeans) over an open fire. The miso and meat is cooked on a gigantic magnolia leaf (called Hoba in Japanese) and goes perfectly with a bowl of steaming white rice. With a full stomach, I headed out once again to explore the streets of Takayama. 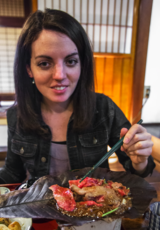 Hida beef on Hoba misoThe town is crowded with travelers on the weekend, and has clearly been turned into a tourist destination, but is quite gastronomically pleasing nevertheless. After lunch I discovered a local brewery which not only offered free samples of sake, but also served soy sauce flavoured ice cream. It tasted light, sweet, and more like caramel than soy sauce, another sign that the town truly caters to foreigners unfamiliar with Japanese cuisine. Tour guides via rickshaw- a hand pulled cart with space for one or two to ride in- were offered along the streets of the old town, but the prices were steep, so I stuck to walking. Aside from the shopping district, Takayama has various museums and historical sites to visit as well. I stopped briefly at Hida Furukawa, another picturesque old town, but I was running out of time. After a quick stroll, I moseyed my way back to the car and set off for Kanazawa around 5pm. A one day road trip was enough to enjoy a taste of the region, but if you really want to experience the area fully, I recommend spending a night in a bed and breakfast and splitting your adventures up over a couple of days. 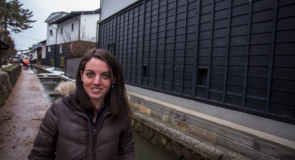 Profile | Gina Addario-Berry / from Canada
Gina Addario-Berry is a Canadian from the West Coast of BC who currently resides in Kanazawa, Ishikawa. After majoring in international development and minoring in Japanese at university in Montreal, Gina came to work in Japan for a few years. She thrives on travelling around the world, discovering the depth of Japanese culture, and going for drives in the beautiful countryside.